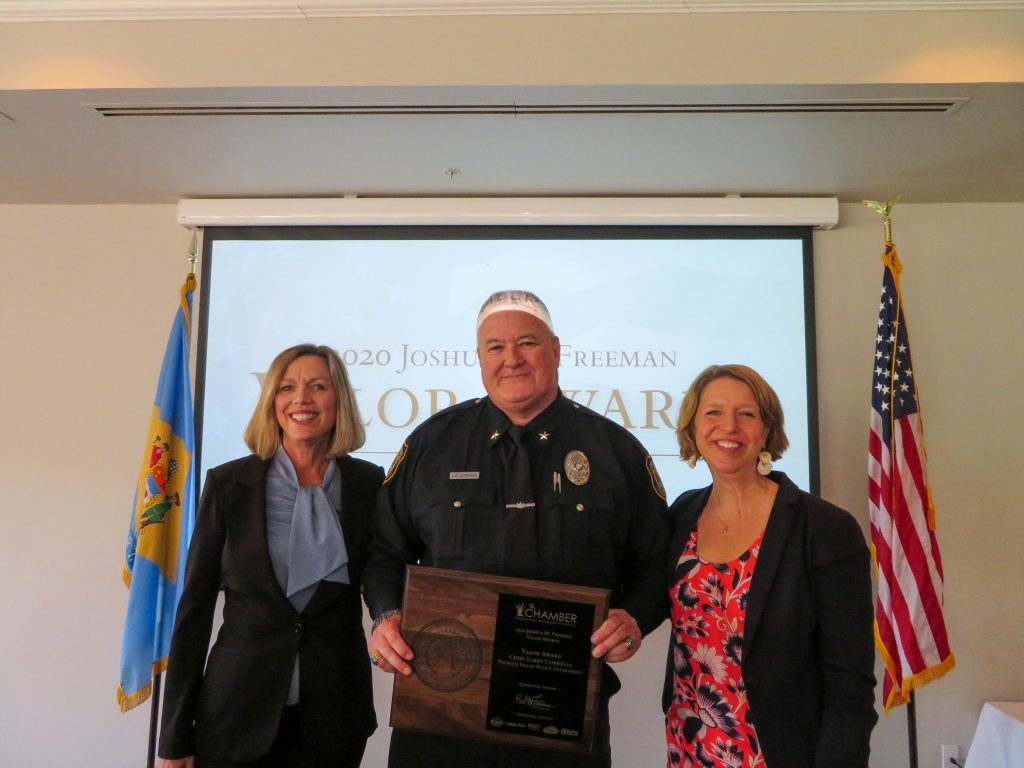 Read the stories of the acts of valor each of this year’s Valor Awards Nominees!

Incident 1:  Corporal Corrigan was investigating the ongoing stalking and harassment of a local business owner and had developed a suspect.  On May 9th, Corrigan saw the suspect acting peculiarly in the parking lot of the business.  Cpl. Corrigan tried to make contact with the suspect, but the man jumped into his truck and fled the area.  Corrigan chased the man in his police vehicle, but the suspect refused to stop, driving recklessly in and out of traffic.  The suspect finally stopped his car in the middle of Route 26 and, using his truck as a weapon, smashed into Corrigan’s vehicle.  The suspect then smashed his truck into a private residence, causing extensive damage.  Corrigan was eventually able to stop and arrest the suspect without injury or loss of life.

Incident 2: On August 30th, Corporal Corrigan responded to a call of a child locked in a parked car in the lot of a local business.  Corrigan arrived to find a one-year-old boy in great distress in the car with all the windows closed.  Recognizing the child was in danger, Corrigan smashed the car’s window with a rock and got the boy out of the car into his air-conditioned police car until paramedics arrived.  The child survived due to the quick action of Corporal Corrigan.

As the Administrative Support Officer and Emergency Manager for the Department, Officer Carter is responsible for Information Technology, data management, emergency management, and the coordination of special events.

Now more than ever, it is critical that the police bring together the best of technology and science to improve crime-fighting efforts.  Officer Carter is always looking towards the future, and his efforts ensure that the Ocean View Police Department remains at the forefront of using technology and modern practices to combat crime and improve public safety.  Officer Carter’s initiative, innovation, and excellence in public safety set a high bar and are worthy of recognition.  Prior to joining the Ocean View Police Department, Officer Carter served twenty-five years with the Baltimore City Fire Department and ten years with the Annapolis Fire Department.

On June 28th, 14 days after Ms, Bravo went missing, her body was located and her death ruled accidental.  Though this is not the result Sergeant Elliott had worked tirelessly to find, this brought much-needed closure to the family and the communities as a whole.  Detective Elliott’s empathy for the victim and her family truly shows in this incident.  In fact, Ms. Bravo’s family reached out to the department expressing their extreme gratitude for Sergeant Elliott’s dedication and kindness.

Officer Foskey performed in an exemplary manner in 2019, following the mission and core values of the department, resulting in nearly 100 criminal arrests.  He was involved in several notable incidents, including a successful vehicle pursuit and arrest of a subject wanted in connection with a stalking case.  In March, he was assisted by the State Police and several other agencies in locating and arresting a shooting suspect.  Later in the year, Officer Foskey responded to an armed suicidal subject who had reportedly cut himself.  Foskey and his lieutenant were able to enter the home, secure the weapon, and begin life-saving measures until EMS arrived.  Foskey’s timely response and actions undoubtedly saved the man’s life.

John Stephens, AKA Mr. Johnny, joined the Millville Fire Company in 1963, making him a 56-year veteran!  During his early years as a Millville volunteer, he was very active with the ambulance service, transporting sick and injured patients in the old Cadillac ambulance. For most of his service years, John has been an engineer, driving and pumping the fire engines at fire scenes.  Over the years, John has held several offices, including Ambulance Captain and President, and he serves on the Funeral, Flower, and Building Committees.  Since his retirement, John has been even more active with the Millville Fire Company.  He was top responder last year, making 417 out of 456 calls.  This is not unusual for Mr. Johnny as he has been the top responder for the last six years in a row!  John has also won quite a few awards, including Firefighter of the Year and the Lifetime Membership, Fire Chief’s, and President’s awards.

And if that isn’t enough, because he lives nearby, Johns looks after our second station on Omar Road, coordinating whatever repairs and maintenance are needed.  He is very popular with career staff as he will often pick up dinner for them if they want something out of our response area.  He is also the main station every Sunday morning with a box of donuts.  John has a special interest in our antique apparatus, making sure they remain in good working order.  He also helps mentor some of Station 2’s younger responders.  You get the picture: John is the epitome of a dedicated volunteer!

Charlie has been very active in the Roxana Volunteer Fire Company since joining in 2008.  Within a few months, Charlie completed his training to become a Fire Police Officer, helping with traffic mitigation and keeping other firefighters safe while they perform their duties on the roadways.  In 2019, Charlie was the top responder with 221 alarms.  When asked to take over the Fire Prevention program, Charlie jumped right in and expanded it from its traditional children’s program to include fire prevention for adults to support the growing senior demographic.  Under Charlie’s leadership, seniors who live in assisted living and other adult communities, as well as seniors who attend the Cheer Center, can now participate in fire prevention education.  Charlie puts in countless hours to make these adult programs a success along with heading up the school programs at Showell Elementary and the School of the Arts in Selbyville.

Another outreach effort Charlie brought back to the Roxana Fire Company is blood drives.  In conjunction with the Blood Bank of Delmarva and the Red Cross, Charlie organized three blood drives at the firehouse in 2019, collecting over 125 units for the local community.

Charlie’s vision to get the fire company more involved in the community outside of its traditional role as a provider of fire and EMS services has been a great success.

Assistant Chief Curtis Stevens dedicates the first Monday night of each month working with new and junior members on basic skills to improve their understanding of fire, rescue, and EMS techniques.  In addition, he regularly participates in preparing obstacle courses and other training events throughout the year.  Stevens devotes several hours a month working with the regional Operation GEM program.  The mission of this junior firefighter program is to give young people the opportunity to learn about fire, rescue, and emergency medical services in the hopes they will become interested in volunteering.  Stevens works hard to raise awareness in the community of volunteer fire service.

Steve Hudson has been an active member of the Selbyville Volunteer Fire Company since 1980.  During the last 40 years, Steve has demonstrated an unwavering positive attitude toward fellow firefighters and citizens in the community.  His exceptional commitment to the department makes him a highly valued member of the SVFC.

Steve has held numerous leadership positions within the company, including Deputy Chief, 1st and 2nd Assistant Chief, Rescue Captain, Engine Lieutenant, and Ambulance Driver.  He is a member of the Truck/Ambulance committee, assisting in the design of a new engine.  Steve has also been awarded Top Ambulance Driver and Fire Responder.

Crystal Hudson is an active Life Member of the Frankford Volunteer Fire Company’s Ladies Auxiliary.  She has provided many years of dedicated service to the community, assisting the fire company with functions and responding to EMS calls as an Ambulance Attendant.  In recent years, she completed her coursework and obtained her credentials as a National Registered Emergency Medical Technician.  Since becoming a certified EMT, she has ensured that the company’s ambulance has responded to many second emergencies that otherwise may not have had a crew.  Hudson has also worked nights, weekends, and holidays on the primary response ambulance, covering for career staff.

Jeff Givans has been an active member of the Selbyville Volunteer Fire Company since 2004.  During the last 16 years, Jeff has demonstrated selflessness and caring and an unwavering positive attitude, making him a highly valued SVFC member.

Jeff has been called upon numerous times to go beyond the normal duties of a volunteer firefighter.  As a dedicated Emergency Medical Responder, Jeff has responded to countless EMS calls, many in the middle of the night.  He has also held multiple leadership positions within the company, including Fire Lieutenant, Assistant Chief, Engineer Lieutenant, Rescue Lieutenant, and Treasurer.  In addition, he served on the Board of Directors.  Jeff is a certified rescue diver and has been awarded Top Ambulance and Fire Responder many times.

On November 11, 2019, Millville Fire Company EMS was dispatched to a home on Lisa Avenue.  EMTs Keith Baker and Andrew Evans discovered 65-year old Robert Kauffman lying on the ground.  The patient wasn’t responsive: he had a head injury and was cold to the touch.  His wife told the EMTs that her husband had been walking on the porch and lost his balance and fell.

An initial assessment led to EMT Evans ventilating the patient and EMT Baker inserting an oral airway and calling the dispatch center to upgrade to priority 1.  Sussex County Paramedics arrived on the scene to discover the patient going into cardiac arrest.  On-scene care was administered and then the patient was loaded into an ambulance, where he was treated aggressively during transport to Beebe Hospital.

Due to the actions of EMTs Baker and Evans in conjunction with Sussex County Medics and the firefighters who arrived on the scene, Mr. Kauffman, a local realtor, is home with his family recovering.  His son is an active member of the Millville Fire Company.

On the night of July 4th, the Bethany Beach fire Company and two of Sussex County EMS Units were called away from the fireworks and dispatched to Coastal Highway where a bicyclist had been hit by a car.

While the patient did not survive the incident, this excerpt from a thank you letter from the woman’s father shows the family’s appreciation for the teamwork of the first responders:

I wanted to write to express our sincere gratitude for what the EMS team did for our daughter.  Kelly was severely injured and sadly passed away on July 6th.  It has been a terrible tragedy, and our hearts are broken.  Kelly was a wonderful person and we miss her so much.  Because of the actions of your EMS providers, we had two days to be with our daughter and say our goodbyes.

Kelly was an organ donor, giving us some solace that six people will now be able to enjoy a better, healthier life because of her gift.

It had to have been an emotional and challenging scene that night, and we are thankful to have such a high-quality group of first responders to care for our community.  My family will be eternally grateful for everything they did.

This incident exemplifies the care, teamwork, and compassion that Bethany Beach residents and visitors receive from the emergency responders that serve this community.  The efforts of the providers were examples of the best of care in the worst of situations that still positively impacted others.

In order to protect both our staff and the public, we are regrettably closing the Visitor Information Center until April 12th, we are planning to re-open to the public at 9:00 AM on Monday April 13th.

Chamber members are encouraged to make appointments to meet with the Chamber Staff.

All State Parks are free until April 30, and annual passes are available to be purchased online here.